Estellaprint offer a fully integrated manufacturing and storage solutions to the book publishing industry, production of packaging for the food and consumer goods sector. We are one of the largest printing and packaging groups in Europe.

With over 50 years’ experience, Estellaprint is the evolution of colour book printer Graficas Estella. We are now a diversified group offering our clients a wider range of production solutions offering a seamless process from your PDF files to the delivered books or folding boxes to your warehouse. We also offer storage solutions should you not require all your goods immediately.

With the full backing of the Lantero Group, a world leader in the packing and packaging industry, Estellaprint benefits from the industrial, commercial and financial synergies offered by our parent company.

An outline of our history

Estellaprint has its origins in Gráficas Estella. This company was set up in Estella (Navarra, northern Spain) in the 1960s by Editoral Salvat, one of the biggest publishing groups in Spain and Latin America at the time.

During the 80s and 90s Gráficas Estella underwent a number of restructuring operations, improving and extending its range of machinery and opening up to international markets.

Rodesa opened in 1999, completing the supply of colour books with a very efficient plant for the web printing of black-and-white books with binding incorporated.

We later expanded by acquiring Unigraf (Madrid), a printing and binding company with a good reputation. This enabled us to increase our capacity and become the leader in Spain for the production of 2- and 4-colour and black-and-white books.

In 2011, through the acquisition of Gráficas Tres, we made a commitment to diversification towards the food and consumer goods packaging sector. This brought together the technical and industrial know-how of Gráficas Estella and the experience and expertise of Lantero Group in the packing and packaging sector.

Estellaprint faces the challenges of the Publishing and Packaging markets with the foremost technology and machines, the most qualified staff, and with the processes and methodologies under the highest quality management thanks to the Lean Manufacturing.

With a large proportion of our products destined to the international markets, we are structured to operate internationally, and cater for the needs and requirement of our customers in Spain, Europe and elsewhere.

Each of our customers can rely on the support of their dedicated account manager, who will monitor on their behalf every stage of the production and delivery process. We communicate with our clients in al the major languages of the European Union. 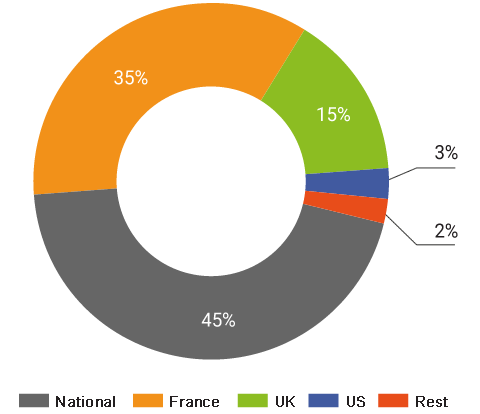 Exports represent about 50% of Estellaprint’s turnover, mainly in France and the United Kingdom.

Estellaprint, a state-of-the-art company in the Spanish Printing and Packaging Industry, has the following objectives:

This site uses cookies to collect statistical data and improve navigation, if you continue browsing we understand you accept to use Learn more